The trip to Australia and the stringent interviewing process, which was conducted over three, sixteen hour, days was a real eye opener for the Father and ended with him and two others being thanked for their attendance and participation. The three candidates were told that they would be notified about the results of the interview within two working weeks and then they were taken to the airport.

See chapter one to get into the story.

The return flight was exhausting and on seeing his wife and two of his children at the airport to meet him, he felt his eyes misting up. He had been gone for a week, what would a year away from his family be like? Brand new doubts and fears welled up inside him.

He hugged his wife and children for what seemed an endless space in time. Somehow, inexplicably, he was missing them already, as if he was leaving, not arriving,

On arriving home, he asked his children to excuse him and took his wife to their bedroom. “It was only a week and I can’t describe how I missed you my love”, he uttered through quivering lips.”It is the first time we have been so far apart in twenty years” she mustered. Then he kissed her hard and with deep passion; swiftly,they fell into the realm of expressing their physical love. Neither had known such ardour in many years. They lay aside of one another, breathing heavily and savouring the moment in stillness; then she broke the silence, her voice deep, “If this is what I can expect when you come home – I think I can bear the pain your going away”. He smiled and kissed her gently.

Soon he was in an exhausted sleep and she, sitting at her dressing table, a deep feeling of contentment that overshadowed her fears, one eye on her sleeping man and the other attending to her hair and makeup.

He awoke to the savour of his favourite beef fillet roast and looking at his watch, he realized he’d been asleep for a full five hours.

He stumbled into the dining room, on route to the kitchen, to make himself a coffee. He blinked as he gazed at the scene set before him. A large banner 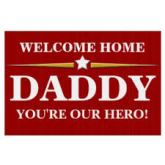 hung from the ceiling, over the dining room table – “Welcome Home Daddy –You’re Our Hero”, it read. The table was set for six, in itself a marvel of artistry genius. “Hello Daddy” his eldest daughter cried, “Welcome back to earth”.

“Excuse me mister”, his wife called out from somewhere at the back of the kitchen, “You are not supposed to be here just yet; now, go off and have a shower, I’ll bring you coffee”. Reluctantly he turned on his heel, wishing he could stay and be part of the merry throng.

He was about to step into the shower, when his wife called out, “Knock knock” and without further ado stepped into the bathroom, coffee in hand. He gazed at his wife, with a love for her that he had not felt in years. She looked at him for a good while before whispering, “You are one beautiful man, I’m so glad you home” She set the coffee down, turned quickly and closed the door. He knew she was crying.

They all sat down together, the children were so excited. Of a truth, no one could remember an experience like this before – not even Christmas Day – a time of real festivity.

Amid much bantering and laughter, the husband told them about his

experience in Australia. The children vied for opportunities to say their piece and in all it was a great enjoyable time.

After the meal and of collective ‘clean up’ the Father spoke. “A big thanks to you Mum and each one of you, for organizing this welcome home supper, the food was superb, the setting exquisite and the company – wow!” he rolled his eyes as he spoke. “What’s exsquizzest, the littlest daughter stumbled”. The younger son muttered impatiently, “Very beautiful”.

The Father began to explain to his children, what it would mean, if his application was successful. How managing the household would fall onto Mum’s shoulders and she would not have a Daddy to be helping her. He explained that that they would all have help take Daddy’s place, until he came home.

He also reminded them that they were to tell no one until his working in Australia was confirmed.

All the while, his wife looked at her husband, with a mixture of admiration for his gentleness, wisdom and her own confused emotions.

To be continued…..look out for it next week.

If you feel this article has value, please send this link to others, writings are meant for people, not for dormant files in our computers and very often when we share them, it results in positive changes in the lives of individuals and even communities.

If you are spiritually inclined see my other site; http://www.adcrucemchristi.com

This site uses Akismet to reduce spam. Learn how your comment data is processed.